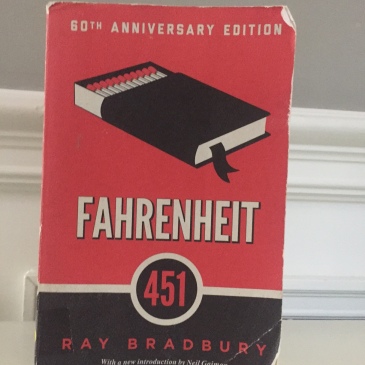 This Ray Bradbury classic somehow managed to escape my school curriculum. I could see why it is a classic, especially in the context of when it was published (1953). It spoke to concerns of the rising technological age and the conformism of the time. They had no idea what they were really in for in … END_OF_DOCUMENT_TOKEN_TO_BE_REPLACED

Well that was depressing…at least that’s what most people tend to think of it. As a psychology professional in my other life, I found her novel to be a fascinating and accurate depiction of one’s descent into mental illness and subsequent suicide attempt. The Bell Jar is considered a roman a clef (French for “novel … END_OF_DOCUMENT_TOKEN_TO_BE_REPLACED

We also celebrated P’s 11th birthday this week. It happened to be a strike day so he didn’t even have to go to school!
At Chamrousse but the kids and I quickly wimped out bc of the cold and wind. So here’s the only photo I’ve got right now. Might be here awhile, so maybe I’ll order the last cocktail on the list…
Les Deux Alpes
Another New Years Day, another walk up the Bastille. 😅
Samaritaine for the architecture. Louvre pyramids. Sainte Chapelle for a Vivaldi concert. 😘
Cosmo wishes everyone a very Merry Christmas. He also wishes someone would drop him some of this delicious smelling food!
Just what I was looking for! A big normal pharmacy 😄
Santa’s on motorcycles going by…just another day in the green capital of Europe. 🤷‍♂️

We also celebrated P’s 11th birthday this week. It happened to be a strike day so he didn’t even have to go to school!
Loading Comments...