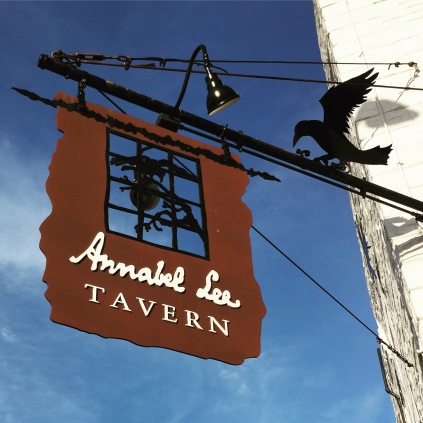 I finally got to try the tavern named after one of my favorite poems.
Edgar Allan Poe spent a couple years and ultimately died in Baltimore. His tomb is a popular spot to visit for fans.
He’s why the football team’s mascot is a raven. As football teams go, I find it pretty damn cool to have a literary reference as a mascot. And the Raven’s name is Poe, thankyouverymuch.
Anyway, it’s a small tavern in the middle of a not-so-great part of town-“off the beaten path” as they say, in Canton. It is tiny, so a cozy dinner for two would do best here.
The yellow cocktail in the photo below is the Annabel Lee, and was well-balanced, strong enough while still maintaining a light taste, not too sweet, not too sour, just refreshing. The duck fat fries had a different twist with herbs de Provence. I am a big fan of Brussels sprouts and they did not disappoint. But the best part was their caramel crunch cake, which my husband claimed to be the best cake he has had in a decade (and he is not one to oversell anything!).
This is a fun yummy stop for travelers who want a real Baltimore feel with a little bit of culture mixed in. 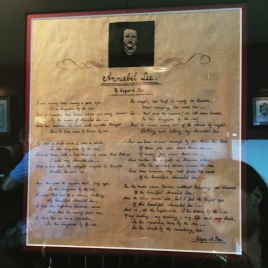