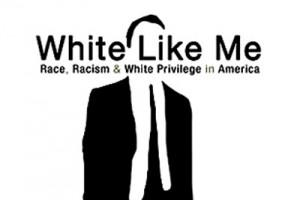 Being the nerd that I am, I jump at the opportunity for things like documentaries and group discussions.  So when I found out about a local viewing of Tim Wise’s White Like Me at the Park School, I was intrigued.  Then election night happened. Suddenly, it was more important than ever for me to get educated, get involved, and share what I learn.

To start, Tim Wise is an anti-racism educator.  In this documentary, he describes his experience growing up in a highly segregated area, though attending a school where he was one of the only white kids. He spoke about his experiences in college fighting apartheid and the point at which he realized there were issues closer to home that could have been focusing on.

After Obama became president, people believed we became a post-racial society. Pundits argued that racism no longer existed if one black man (out of 40 million) could attain the presidency. I argue that this thinking has actually led to a phenomenon that social psychologists have termed moral licensing. Now that we have a black president, we can pat ourselves on the back and actually allow ourselves to indulge in more negative (racist) behavior.  How many times have you worked out and then decided to have that ice cream because you’ve earned it. I love to get a salad for dinner so I can then reason fries on the side and a dessert. Classic example in talking about race-“I’m not racist, I voted for Obama” or “I have black friends, therefore, whatever I say is clearly not racist.” That is moral licensing. Here’s a clip of Malcolm Gladwell discussing this concept.

In this documentary, Wise discusses the idea of white privilege. Up until now, I thought of it as simply being lucky enough to be born into a race that is not discriminated against, that is given the benefit of the doubt at every turn. So many white people are blind to their privilege, not realizing  how hundreds of years of socialization and policy have served to improve their likelihood of success in life.  Often we see our own struggles and give ourselves credit for our own successes, without noting the societal context in which we operate, the role that our cosmic or genetic lottery plays in the forecast of our lives.

I can’t count the number of times I have heard white men argue that they worked hard for what they have earned and that no one has ever helped them, how they came from a modest home and were not given any breaks in life. If I can do it, why can’t people of color? Why must POCs be given special treatment, especially at what they see as their expense? They fail to see how being white could possibly have benefited them in their lives or how the deck has been stacked in their favor compared to the average person of color. Sometimes it’s not as extreme as this. I believe there is a spectrum on which a lot of people sit, realizing they have it better, but not fully appreciating the extent of it.

Studies have also found that students of color are worried about confirming negative stereotypes. Fear of living down to a negative group stigma directly affects their performance on tests. At the discussion I attended, I sat in front of a young African-American girl, probably about 8 or 9 years old, who spoke directly to this phenomeon. She described having thoughts like “If I don’t do well on this test, they’re going to think it’s because I’m black.”

Later, this same girl went on to discuss her fear and how she felt after Donald Trump won the election. She had the courage to open up to this group of adult strangers to express how she feared for her life and those of her family members. It was heartbreaking.

In his documentary, Wise takes us through an American history that not only served to put African-Americans down, but at the same time propped up whites. We see a history of African-Americans being left out of social programs as far back as FDR.

For example, FDR started a job insurance program to help unemployed workers. However, in order to get southern Democrats’ approval, he excluded agricultural and domestic workers, 80% of whom were black.

Time and time again, African-Americans were held back in regard to jobs, education, and housing. A more in depth explanation of how these programs benefited whites and excluded blacks can be found here.

Many unflattering facts and stats are thrown around in this documentary. One that stood out to me was the statement that “studies have shown that white job applicants who claim to have criminal records are more likely to be called back for interviews than black applicants without criminal records.”

Wise touches on the issue of affirmative action. He cites statistics arguing that for every person of color who benefits from preferential treatment in college, there are two white students who receive preferential or alumni status. He also cites studies finding that only about 0ne quarter of one percent  (that’s .25%) of all scholarship money in this country is specifically earmarked for students of color.

“Right now, there are more African-Americans under correctional control, in prison or jail, on probation or parole than were enslaved in 1850.” Wise cites Michelle Alexander’s The New Jim Crow: Mass Incarceration in the Age of Colorblindness, which argues that America’s war on drugs has resulted in a “new system of racial control.” She discusses the scale of mass incarceration largely defined by race and class. The size of our prison system quintupled in a 30 year period of time due to the drug war, rather than a rise in crime rates. This resulted in disproportionate rates of incarceration for poor people of color for primarily non-violent drug related offenses, even though these crimes occur in roughly the same frequency across races,in all communities. But those who are imprisoned are overwhelmingly people of color.

Alexander describes our current system as the new Jim Crow because, as she argues, mass incarceration has led to legal discrimination of people of color in some of the same ways that they were discriminated against under the original Jim Crow laws. Find out more about Jim Crow laws here.

Once people are incarcerated, they are faced with problems finding jobs, have their voting rights stripped, and are excluded from juries. Alexander describes a “parallel social universe” where they are legally discriminated against for housing, loans, jobs, access to education and public benefits.

When was America great?

In this documentary, well before “Make America Great Again” became a campaign slogan, Wise noted this longing by some for a time when America was once great. And he asked the same question many on left had been asking all summer. When exactly was America great? What year or time period are they referring to?

Wise describes the year 1957 as the “Golden Age” the year that is dear to conservatives before all the struggles for justice and civil rights in the 60’s. People today claim that government is too big and taxes are too high. However, the top tax rate in 2012 was 35%, but back in 1957 it was 93%, with a lot of government programs that were very popular.

Wise argues that this popularity disappeared when welfare started to be focused on people of color, rather than whites, throughout the media. Even though the majority of people that benefit from welfare are white. Before the 60’s the media coverage was focused on poor whites and it was sympathetic and humanizing, and public support for the social safety net was high. Once the media focused on poor people of color in poverty, they were viewed as “moochers abusing the system.”

Wise briefly discusses the idea of implicit bias. We are conditioned by society to see people of color as less qualified. Neuroscientists have studied the phenomenon of implicit bias and even POCs in their studies have demonstrated implicit preferences toward white people. We are all walking around with biases we may not even be conscious of, but that still inform our preferences. Here’s a fun way to test yourself and see where you may have biases you’re not even aware of!

Imani Perry, an African Studies scholar at Princeton describes the idea of being colorblind as unrealistic. To not “see color” would be to willfully neglect or close one’s eyes to  the reality of diversity as well as the reality of inequality and injustice.

Further, Wise argues that colorblindess could “lead to an intensification of racist thinking.” If we don’t have a context to explain the disparities and inequalities we see, then we are left with racist explanations as to why people of color may be less successful. Without the context of historical background, they must be innately inferior. As one Harvard professor interviewed said, “If we are not trying to see the discrepancy” then naturally, we are also “not trying to address it.”

So what then, should we strive for?  How about being simply color conscious? Wise describes this as “confronting the truth about race and racism in this country and asking the tough honest questions about how the history of racism in America continues to shape the present.” Michelle Alexander describes this more beautifully as seeing each other as we are, with our baggage and differences, and still accept love one another. We should recognize and care about others’ experiences and struggles rather than try to ignore or be blind to it.

In this post, I noted the most salient concepts from White Like Me along with some concepts that I felt were also important to consider. Wise discusses the above ideas more in depth. So don’t just read this and move on. Whether or not you object to these concepts and the facts/studies mentioned, I highly recommend watching this compelling documentary. If for no other reason than to see or understand a different way of thinking about race.

Valentine’s Decorating in Progress #loveoneanother #valentines
#bestofficeever Can’t beat having my dog sleeping next to me and a fireplace. He was having a dream while I worked on my next blog post.
#lifeisgood @thecornerpantry Where apparently stay at home moms congregate. #hotchocolate and #avocadotoast
Stockings hung by the fire. ❤️💝
Obligatory tree picture. The tree’s not crooked but the photographer is! #christmastree
#bûchedenoël French Christmas tradition
#nerdalert My husband bought a microscope 🔬 for the kids #alwayslearning
Finally got around to hanging Eva’s #showribbons . Turns out, it was #onthisday 1 year ago that I inquired on FB about finding a new stable for Eva to take her riding to the next level. 💗
First trip to the #scoutshop for our new #wolfcubscout What a cool #oldbaltimore building